When Kingswood School suffered a problem with two of its ceilings, the best option was to work with a building contractor in a completely new way. John Perkins Construction’s Rupert Perkins talks to Kingswood School’s bursar, Steve Vickery, about what other independent schools can learn from the experience.

Kingswood School in Bath boasts a 200-acre site, with a magnificent estate dating back to the 19th century. These historical buildings are part of the school’s charm. Yet, as every school bursar knows, historical buildings come with headaches. Issues can arise when you’re least expecting it.

“A problem with the library and dining hall ceilings came out of the blue,” comments Steve Vickery, bursar at Kingswood School. “This issue with the beams meant that we had an immediate duty of care to carry out repairs. The situation was complicated by the fact that we were dealing with historical buildings. Until the ceilings were opened up, there was no way to know exactly what was going on under the surface.”

The school was in a quandary. Typically, building projects at Kingswood School are put out to competitive tender, in the traditional, time-served way. But, if you don’t know what you’re dealing with, how can you use the typical, traditional tender process?

“The amount of unknowns in the ceiling repairs meant that, if we asked a building contractor for a fixed cost, we knew it would be extremely high,” says Mr Vickery. “This wasn’t financially viable for us, so we took a leap of faith and tried something different.”

The result was a two-stage tender process based on quality considerations as well as price. John Perkins Construction won the initial bid. Kingswood School, on the advice of its employer’s agent, signed a JCT Management Contract, meaning a target cost plan could be produced and monitored. This meant that each stage of the works would be negotiated as the project progressed.

Working towards a common goal

“It was a big show of trust between the school and the contractor to proceed in this way,” comments Mr Vickery. “We worked together on a genuine open-book basis. Once the two sides had agreed the management costs and Overhead and Profit, there was a sense that everyone had a common goal. The best way to achieve it was through collaboration.”

A collaborative approach turned out to be critical. The works to repair the ceiling beams were complex. And working in a school with more than 900 students, many of them boarders, presented an extra set of challenges.

A strong sense of professionalism

“The beginning of the works coincided with exam season, so during certain times there could be no drilling,” says Mr Vickery. “Above the library, there are occupied bedrooms, so access needed to be restricted first thing in the morning. We had to put a lot of trust in John Perkins Construction and their supply chain. It was of paramount importance that safeguarding rules were adhered to.”

“Fortunately,” he adds, “John Perkins Construction exhibited a strong sense of professionalism, always looking out for our needs and showing respect for safeguarding.”

Knowing where the money was going

On the financial side of things, the new way of working between school and contractor meant new practices. A major factor that contributed to the success of the project was getting everyone around a table every two weeks. These regular meetings, between the school bursar, the employer’s agent, and the John Perkins Construction team meant that there could be true transparency.

“What was really important to us was transparency over costs, and honesty about the programme,” comments Mr Vickery. “The fact that John Perkins Construction regularly updated us with a programme, a cost plan and a cashflow forecast meant that we knew early about any extra costs or delays. The whole team at Kingswood School was better able to understand exactly where the money was going.” 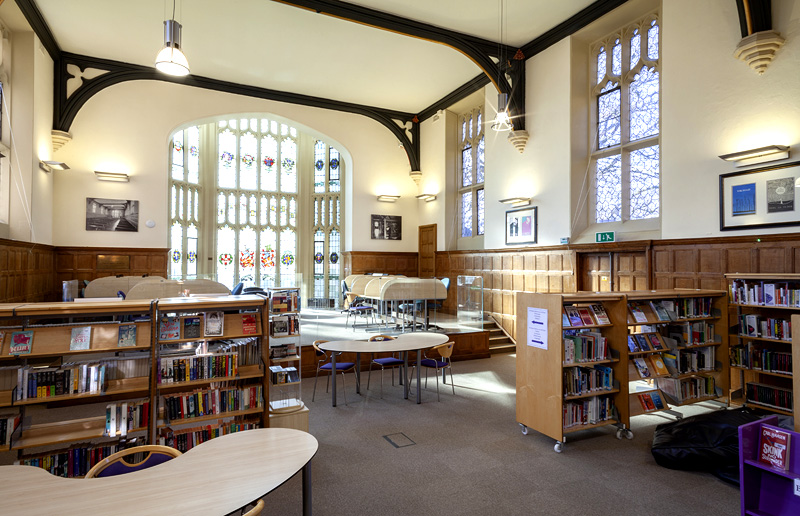 The repairs to the dining hall and library ceilings were carried out over 17 weeks, and ended up costing approximately £700,000. Although the project was unforeseen, it has secured the stability of two of Kingswood School’s historical buildings and made these much-used spaces feel much fresher.

“We’re really pleased with the end result,” says Mr Vickery. “For us, it was the little things that made the difference. Part of the works were scheduled to end at the close of the summer break. Not only did the John Perkins team have the dining hall finished for the first day of school, they made sure the prefects’ list was up on the wall. This meant a lot to the students.”

For Kingswood School, what began as a nerve-racking need for emergency repairs, ended as a positive experience. Other school bursars can learn from this. It’s easy to approach every building project in the same old way. However, inevitably, one-size-fits-all doesn’t always fit.

Independent schools can reap real rewards from putting in place new ways of working, such as using staged-negotiations, and collaborating on a truly open-book basis.

4 things I learned on work experience at John Perkins Construction

This week, the John Perkins Construction team was joined by Frankie Yeandle, a student from...