"It’s a real pleasure to be Chairman of John Perkins - and to have the support of a dedicated and loyal group of fellow directors and employees."

Robert Yeandle has worked within a Perkins company for almost his entire career, joining the original John Perkins & Son in 1978 as a trainee surveyor/estimator. In co-founding John Perkins Construction with David Perkins in 1992, he sought to bring the history and pedigree of the Perkins name to a new and vibrant business.

Rob, in his former role as Managing Director, helmed the ship for more than 25 years, from modest beginnings to an annual turnover on course for £10million (2019). In 2020, he became the company’s Chairman.

As Chairman, Rob has refocused his attention on the bigger picture of John Perkins Construction, identifying fresh ways to ensure the resilience of the business going forward. 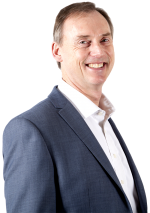 To achieve the accolade of Most Considerate Site 2018 in the category of £1 million to £5 million is a monumental achievement. As an SME in the construction sector, John Perkins Construction has proved that construction sites and companies of any size can reach and exceed the very highest standards of industry best practice.